You have 0 Documents collected. Go to My Documents

Drainage technology for the Olympics

At Sochi, the venue of the 2014 Winter Olympics, the authorities invested heavily in infrastructure projects. A range of new transport links connect the Olympic Village, the hotel locations and the sports facilities. Two large projects were built using drainage systems by HAURATON, the drainage specialist from south-western Germany.

Reliable drainage on all levels
For the construction of an important traffic interchange in the Olympic metropolis the engineers opted for HAURATON products. Heavy-duty FASERFIX KS channels by the precipitation specialist from the Baden region of Germany were specified for the multi-level road construction project in Sochi. A perfectly functioning surface drainage system was particularly important for this sophisticated road design.
In order to ensure free-flowing traffic, the road layout was designed without crossings. The carriageways have been arranged on several levels above each other. This presents special challenges for the drainage system: while the hard shoulder of a road at ground level provides the option of draining water directly into the ground, the water from the hard shoulders of raised road levels has to be drained via a comprehensive and reliable system. To meet this demand, robust channels with large hydraulic capacity and heavy-duty ductile iron gratings were installed along the carriageways. A total of 2,200 linear metres of FASERFIX channels was installed, ensuring reliable drainage of the multi-level road system. Furthermore, two large separators – also provided by HAURATON – were installed in order to provide effective cleaning of the water run-off.


Long-lasting and corrosion-free system for Adler railway station
Another large project involved the drainage system for the Adler railway station, which was also supplied by the family-owned company from south-western Germany. The railway station serves the town of Adler, located near Sochi, which is the main location of the Winter Olympics and home of the Olympic stadium as well as that of four further venues, where the ice sports competitions are currently taking place. Amongst other events, the town hosts the opening and closing ceremonies.

The new railway station, with its futuristic building, is unmistakable. In the adjoining multi-storey car park, RECYFIX PLUS and STANDARD channels were installed for the reliable drainage of the parking decks. In this context, the shallow cross section of the channels was important. The low height of the channels means that they can easily be integrated in the floor structure, a feature that makes them ideal for installation in multi-storey and underground car parks.
Another advantage is that the channels installed in the railway station project are of PP, and hence not subject to corrosion. Likewise, the KTL-coated ductile iron gratings are as resistant to environmental factors as the channels themselves. They are not affected by frost or salt, do not rust and retain their appearance over the long term. These durable HAURATON channels were also installed on the station platforms.

The Adler railway station will continue to be an important transport intersection for all transport connections beyond the Olympic Winter Games – travellers will have access to rail, road and air traffic, as well as sea transport in the future. In total, 2,300 linear meters of RECYFIX channels were installed at this new development.

A multi-level road construction ensures a smooth flow of traffic.

Two seperators installed in the underground clean the polluted water.

The new railway station of Adler is a traffic junction of the black-sea region. 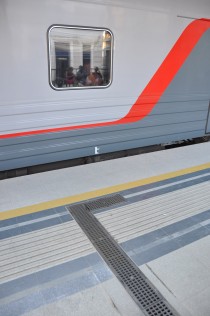 Drainage of plattforms at railway station Adler.
Home
Drainage technology for the Olympics