You have 0 Documents collected. Go to My Documents

London’s Heathrow Airport with 67 million passengers per year is the largest airport in Europe. Worldwide it ranks behind Atlanta and Chicago in third place. The important hub for international air traffic is run by BAA, the British Airports Authority, the world’s largest airport operator. 75% of the British Airways fleet is stationed at Heathrow.

On the south section of the airport, the maintenance park of British Airways is undergoing extension until April 2008. Parts of it became operative in December 2007. The building site borders directly on runways and taxiways. The demands made on the new maintenance site are enormous. All types and sizes of aircraft fly from here – including, from 2009, the Airbus A380, which is one of the main reasons for the site development. The tow trucks alone weigh 80 tonnes, and run and turn, just like the aircraft, on the thoroughfares. Equally demanding are the requirements made on the drainage systems.

In 1999, FASERFIX SUPER channels were already supplied on behalf of BAA to Gatwick Airport and integrated into the British Airways hangars and Concorde waiting halls. One year later saw FASERFIX SUPER KS 100 channels being supplied to London City Airport.

The engineer consultants in charge were very satisfied with the quality and service. In 2003, the issue of the installation and handling of drainage systems became a central theme at BAA. The main focus of the discussions was the tremendous weight of the products and the large amount of machinery required to install them.

Andy Beirne, Technical Sales Manager of HAURATON UK, contacted different departments at BAA on several occasions and presented the advantages of RECYFIX products (light weight, easy handling, conformity to British health and safety standards = One-man lift = max. 25 kg). At various meetings, drainage channels from this product line were presented, and BAA decided as a general principle to work with HAURATON in future in the area of RECYFIX. 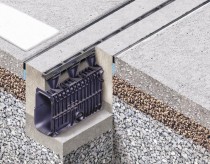 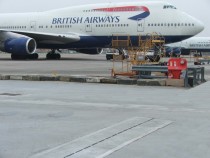 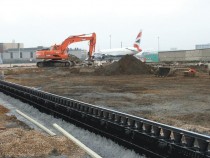 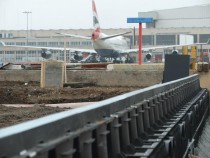